Hello from my Creative Squad! Today we have a post and video from Riikka Kovasin who is sharing an art journal page that takes an artwork and subject matter and makes them all her own with my Fairview Fan foam stamps, ATC Mixup stencil, and Mesa Verde stencil. Our theme: Favorite Art – My Way – Look at a favorite work of art and create something inspired by it, drawing from the colors, shapes, subject matter, feeling etc. that strikes you most when you look at it.

The Whole World is a Garden

Heippa! It’s Riikka Kovasin here today to share my take on the “Favourite art – my way” theme. Like I say in the video, I again struggled a bit in the beginning. This time the trouble was to narrow down the options!

Choosing a Finnish artist was a must for me. At first, I thought about a female artist, but didn’t want to go with Helene Schjerfbeck. For one, I wanted to highlight someone maybe not as known and secondly, I’ve already used her art to inspire me a couple of times (check out an example here). My second choice was a lady, who’s photo is always on my craft table, Ellen Thesleff. I love her work, but none of the pieces really jumped up to me this time and was like “me, redo me!”. The reason for this might also be that I’ve used her art before as well here. Back to the drawing board it was!

I then decided to take a totally different approach to the subject and let a tool do the deciding for me. Like I say in the video, since I got the “Fairview Fan” foam stamp set, I’ve seen the other stamp as a skull. I have been eyeing it before, thinking about a Halloween card, but had not yet jumped to the idea. So, now was the perfect time! After deciding on the skull, it was then easy to pick up the artist and artwork.

Death, as a personification, is a re-occurring character in the works of Hugo Simberg. He’s not a scary character but more a bit lost and an outsider. In some ways he reminds me of the Death in the Discworld series, not quite getting the ways of men. My favorite piece with Simberg’s death character is a painting called “Kuoleman puutarha”. The subject was so dear to the artist himself that he did several versions of the piece. What I used as my reference here, is made in 1896, a small gouache and watercolor work. You can read more about the piece here (link) and about the artist here (link).

In the painting, there’s three death characters caring for the plants in their garden. While my favorite of the three is the one on the left, leaning on the workbench, watering the plants, I chose to make a version of the second character, the one in the center. He’s the one who usually gets pointed out as the posture of the character is so tender, almost fragile. My character doesn’t have the same fineness of the posture, but I hope the atmosphere still comes across!

If you’d like to see, how I made the page, please see the video below. If you want to jump directly to the making process and avoid the introduction, the process starts at 1:08.

What I used in my piece, besides the obvious character, was the warm honey toned color scheme. Like I said earlier, Hugo Simberg did several versions of the subject, but as they are mostly black and white, they are missing the warmth of the watercolor piece that inspired me. Another colored version of the “Kuoleman puutarha” is at Tampere Cathedral. The colors are a bit different in it as well, as it’s a fresco, painted on the cathedral wall.

While the original artwork has an abundance of strange plants, I depicted those in my take more uniformly. The background flowers represent the other plants in the garden, while I highlighted the bluebell-styled flora as it’s the one the character is holding.

I hope you don’t get frightened by this character but rather find him endearing! Thank you for stopping by today!

Thank you Riikka for sharing your brainstorming process and also your beautiful take on a subject that is not often represented in such a tender way!

Give it a try: you can find all my Foam Stamps, Stencils and Rubber Stamps in my Online Shop and here are some of the supplies Riikka used: 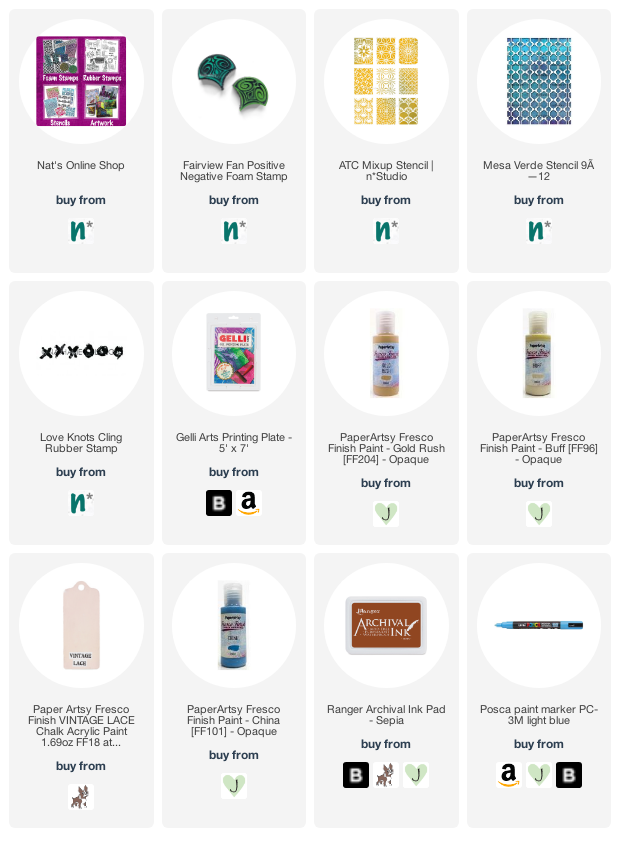