I’m celebrating! Just one year ago today I released my first book, Artful Adventures in Mixed Media and I still get excited thinking about everyone who has picked up a copy and incorporated some of the ideas inside it into their own artwork. It makes me so happy when students bring their books to my workshops for a signature and I get butterflies when I spy it at a book store for purchase. So much went into putting it together and getting to work with so many talented people was an amazing journey. So today I am throwing a Happy Anniversary Party and a 10% off sale in my Online Store in honor of all that!

In honor of 1 Year of Artful Adventures, I am having a little event in my Online Shop, and you can save 10% on all physical product purchases. Just enter the coupon code ARTFUL10 when you check out and you will get 10% off the book, stencils, stamps, stamp sets, artwork (even my newly listed original paintings and drypoint prints), mugs, destash items, and a few other things. In fact, a couple of my paintings that are featured in the book are now available in the shop and are part of the sale: Sky over Berlin and LaBoca. Hurry though, this sale end at 11:59pm EST on Sunday, June 10th, 2018.

If you don’t have a copy of Artful Adventures in Mixed Media yet, you should definitely check out this book review by my friend Gina Lee Kim. She is a super talented watercolor artist who has taught in Creative JumpStart several times and was kind enough to put together this video. I love that it shows how she used a lesson in the book to inspire her own artwork. Check it out:

If you have a copy of Artful Adventures, Thank You and be sure to add one of my free signed book plates to your shopping cart while you enjoy the sale. I would love to personalize one for you – let me know in the Notes section of your order :)

Happy shopping! Happy creating! And I hope your Artful Adventures continue to inspire you :)

I hope you are letting go this weekend and having some fun with your art making :)  For more inspiration, pick up a copy of my book Artful Adventures in Mixed Media for yourself or someone on your holiday list who could use some creative encouragement!

Happy Saturday my friends, I hope you are being brave with your artwork this weekend :)  For more inspiration, check out my book Artful Adventures in Mixed Media.

Hello my friends, I hope you are out and about this weekend connecting with each other and gathering all sorts of inspiring stories :) For more ideas on finding inspiration, pick up a copy of my book Artful Adventures in Mixed Media.

Hope you are having a great weekend and out finding inspiration :)  For more ideas, check out my book Artful Adventures in Mixed Media.

This part #2 of our road trip through mostly the South West of the U.S driving about 2,300 Miles which called Tour of the American Ancients because we visited many historical sites. It was awesome and so inspiring and I am sharing some highlights, spread out over the next couple weeks in three parts :) You can find Part #1 here.

After Hovenweep we drove up to Mesa Verde National Park, Colorado where we already stayed 7 years ago. We took again the ranger lead hiking tour to one of the cliff dwellings- the Cliff Palace and it was yet again awesome. Sometime during the late 1190s, after primarily living on the mesa top for 600 years, many Ancestral Pueblo people began living in pueblos they built beneath the overhanging cliffs .Cliff Palace contained 150 rooms and 23 kivas and had a population of approximately 100 people. By the late 1270s, the population began migrating south into present-day New Mexico and Arizona. By 1300, the Ancestral Puebloan occupation of Mesa Verde ended.

Our Ranger was a Native American and I loved hearing his perspective on archeology and view of history in North America. Even though it was our second time doing this little hike- it was a different experience and opened a different view point.

and after leaving the Highway at some point we drove a 16 mile long dirt road to get to one of the most amazing park: Chaco Culture National Historic Park in New Mexico. This valley was the center of a thriving culture a thousand years ago. Chaco is central to the origins of several Navajo clans and ceremonies. Many Southwest Indian people look upon Chaco as an important stop along their clans’ sacred migration paths-a spiritual place to be honored and respected.

The remains of Pueblo Bonito are just stunning and breathtaking. Researchers found out that the huge city used to be white and was occupied by Ancestral Puebloans between AD 828 and 1126. It must have been an amazing view upon arrival and they found traded goods that came from far south of South America.

some of those structures soared to four or five stories.

They had an air conditioning system and evidence suggests that the Chacoans were expert skywatchers, with a clear knowledge of the cyclic and seasonal patterns of the sun, moon, and stars. This knowledge is reflected over and over again in the architecture of the great houses, and in various observational and ceremonial sites around the canyon.

It is a magic place and I am so glad we went. It is so worth the visit. I can see why this is a sacred place and I am kind of glad it is so out of the way – maybe that will keep it from being destroyed.

and of course we saw more petroglyphs while hiking.

and this little dude – smartly staying in the shadow…it was HOT. We drank so much water and basically it all just evaporated right away.

Our next stop was Petrified Forest National Park in Arizona. Above a photo of the so called painted desert.

The one hundred year old Painted Desert Inn in the park hosts a museum and the skylights in the building were painted by the Civilian Conservation Corps around 1933. So cool!

Beautiful place and scattered all around are those petrified former tree logs- now stones.

Look how gorgeous some of those logs are up close!

Every corner revealed a new look and great area to hike- we liked it a lot.

I feel like some of the textures and colors will make their way into some future artwork. One more post from our trip to come – hope you enjoyed this little adventure so far.

Happy Saturday to you and a little happy thought from me :)  For more inspiration, check out my book Artful Adventures in Mixed Media.

Last month my husband and I set out for our vacation – a road trip through mostly the South West of the U.S. We drove about 2,300 Miles and had an amazing time hitting many spots we went to before and a lot of new ones. We called it the Tour of the American Ancients because we visited many historical sites. It was awesome and so inspiring and I would love to share with you some highlights, spread out over the next couple weeks in three parts :) Join me on this Artful Adventure – Here is Part #1

This little guy was crossing the street in Nevada. The Desert Tortoise of the Mojave Desert is endangered and we have not seen one the two times before we were here- but this time we were lucky. We saw two Jack Rabbits right before, so maybe they were on a race. Needless to say we named the tortoise “Cecil” ;)

We visited Bryce Canyon, Utah yet again only for a short stint – we promised ourselves next time to really spent some time here and hike- it is so beautiful.

Those hoodoos had the most interesting gradated coloration – love it.

We drove on Highway 12 which is located near the north end of the Grand Staircase – Escalante in southern Utah. The views are breathtaking (and so is the driving- LOL).  Highway 12 is the 2nd on the list of “Most Beautiful Highways in the World“. Apparently the Grand Staircase-Escalante National Monument is planned to be stripped of it’s Monument status and protection.

We had a great time at Capital Reefs National Park , Utah last time and planned a day of hiking there.  We stayed for two nights. We started the early morning off with a Ranger talk about Geology and it was super interesting and made us unterstand the area and different layers better.

While hiking I make sure to take a lot of photos so that I can take a breath ….eh I mean..for inspiration of course ;) Gnarled bent tree trunks- the texture and movement- so beautiful.

We hiked up to a natural bridge and then through a Canyon.

Look at the rock texture and doesn’t the hole look like a heart?

This formation looks like a nice layered chocolate cake …or maybe I just started to hallucinate as it was SOOOoooooo hot ;)

I just couldn’t get over the different layers and texture and the colors. I am not very well known for using a lot of earth tones in my work -but this trip definitely made me want to try it out.

We drove on and stoped at Natural Bridges National Monument in Utah. We had a lunch picnic under this natural bridge – one of our – so it felt – 200 hundred sandwiches on the trip ;) There is something so serene and wonderful to eat outside in nature and just be silent (well…besides the crunch of the salad) while taking it all in.

Our next stop was Hovenweep National Monument in Colorado and Utah- which was a new one for us. In the area are six prehistoric villages built by ancestral Puebloans between A.D. 1200 and 1300 and it was stunning to see those buildings at their locations. This tower building above reminded me a lot of some of the old castles of the time you see in Europe and I find it fascinating that at the same time on different continents the same structures were erected.

What a part of the history of this country – and ….this park was almost empty – nada nothing …and a lot of people did not seem to know about it.

It is a magic place  and I am so happy we went. I wish we could have stayed over night – it is supposed to be pitch black and the perfect place for star gazing. I took lot’s of notes, and sketched- just as I describe in my book Artful Adventures in Mixed Media and I cannot wait to see what parts of this trip might make its way into my artwork. More from our trip to come – hope you enjoyed this little adventure.

Loved playing with my new Midtown ArtFoamies Set. Using both sides – the solid and the pattern side – and different acrylic paint colors I layered up a city scape.

I painted the lady first with acrylic paint and then went over with oil pastels- I just love the look of those two paint mediums together.

I love this set so much – I cannot stop using it  -LOL- someone stop me ;)

Here are the supplies I used for this spread: 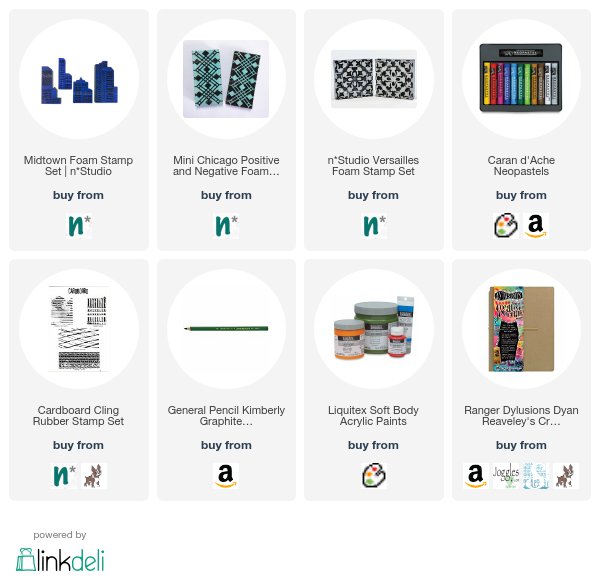